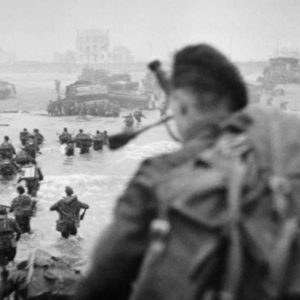 OPERATION OVERLORD (THE NORMANDY LANDINGS): D-DAY 6 JUNE 1944. The British 2nd Army: Commandos of 1st Special Service Brigade landing from an LCI(S) (Landing Craft Infantry Small) on ‘Queen Red’ Beach, SWORD Area, at la Breche, at approximately 8.40 am, 6 June. The brigade commander, Brigadier the Lord Lovat DSO MC, can be seen striding through the water to the right of the column of men. The figure nearest the camera is the brigade’s bagpiper, Piper Bill Millin.

The 1st Special Service Brigade was a commando brigade of the British Army. Formed during the Second World War, it consisted of elements of the British Army (including British Commandos) and the Royal Marines. The brigade’s component units saw action individually in Norway and the Dieppe Raid (in France), before being combined under one commander for service in Normandy during Operation Overlord. On 6 December 1944, the Brigade was redesignated 1st Commando Brigade. 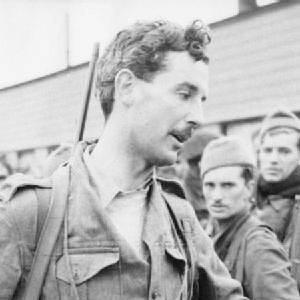 During the Sword landings, Lord Lovat reputedly waded ashore wearing a white jumper under his battledress, with “Lovat” inscribed into the collar, while armed with a “short barreled U.S. Army carbine” (presumably an M1 Carbine). Lord Lovat instructed his personal piper, Bill Millin, to pipe the commandos ashore, in defiance of specific orders not to allow such an action in battle. When Private Millin demurred, citing the regulations, he recalled later, Lord Lovat replied: “Ah, but that’s the English War Office. You and I are both Scottish, and that doesn’t apply.”

William Millin (14 July 1922 – 17 August 2010), commonly known as Piper Bill, was personal piper to Simon Fraser, 15th Lord Lovat, commander of 1 Special Service Brigade at D-Day. Millin was born in Regina, Saskatchewan, Canada on 14 July 1922 to a father of Scottish origin who returned to Glasgow as a policeman when William was three. He grew up and went to school in the Shettleston area of the city. He joined the Territorial Army in Fort William, where his family had moved, and played in the pipe bands of the Highland Light Infantry and the Queen’s Own Cameron Highlanders before volunteering as a commando and training with Lovat at Achnacarry, near Fort William in Scotland. Lovat appointed him his personal piper during commando training. Millin was the only man during the Normandy Landings who wore a kilt – the same Cameron tartan kilt his father had worn in Flanders during World War I – and he was armed only with his pipes and the sgian-dubh, or “black knife”. In keeping with Scottish tradition, he wore no underwear beneath the kilt. He later told author Peter Caddick-Adams that the coldness of the water took his breath away. After the Normandy Landings,  Millin saw further action with 1 SSB in the Netherlands and Germany before being demobilised in 1946 and going to work on Lord Lovat’s highland estate.

Combat Camera is a specialist magazine focusing on the work of military photographers from the UK’s Armed Forces, the US military and other military organisations.